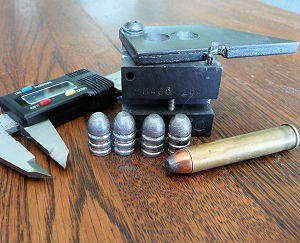 My initial calculations were done using only the two silver bullets which had been properly cast. Since then, I've cast and measured two additional silver bullets. The following table shows a comparison of length, diameter and weight between the lead and silver bullets cast from the same mold. Diameters were measured at two points on the bullet base, offset by 90°. Linear dimensions are shown in inches, which is the usual measure of caliber (bore diameter).

Working from this data, we can adjust the dimensions of a standard bullet mold to produce a silver bullet of an appropriate size.

Most bullet mold manufacturers cut molds using a "cherry", which is basically a router bit in the shape of the desired bullet. The cherry is expensive to produce, but it can be used to make a number of identical molds in a consistent, reproducible manner. However, each time the bullet profile is changed, a new cherry must be produced, at a cost of several hundred dollars.

A mold can also be produced by lathe-boring. This method is difficult, time consuming, and less consistent than using a cherry, but it's easy to customize. Mountain Molds in Cottonwood Idaho uses lathe-boring and provides a convenient on-line application to design your custom mold. I used the application to specify a bullet with a nominal weight of 280 grains, a diameter of 0.435 inches. I added a crimping groove to make it easier to reload consistently, and specified three body bands based on the assumption that smaller body bands would be easier to deform to fit the bore. Because the .444 Marlin requires a very short bullet, I specified a nose length of .335 inches, and reduced the diameter of the front body band to .430 inches. The on-line design program not only allowed me to specify all of this (and potentially many more options), it calculated everything from the suggested twist rate to the sectional density of the resultant bullet. I printed out the specifications, and sent a check to Dan at mountain molds, then settled in to wait.

A couple of months later, the FedEx man dropped off a bright, shiny new mold for me to play with. I couldn't wait to play with my new toy, so I ran to the lab to cast some lead bullets. They came out looking just like the picture, and a quick check with the micrometer shows them to be dangerously-oversized for a .44 caliber bullet. Of course, this is just what was wanted!

Next: Casting The Real McCoy