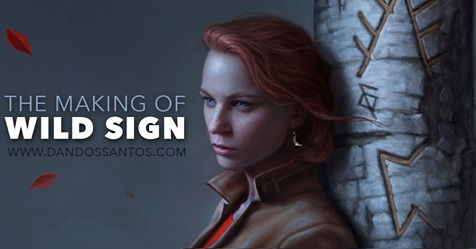 Dan Dos Santos is an uber talented genius; Patty and I adore his work SO much - he is so amazing!
Dan recently posted about his newest painting for Patty's Wild Sign (Alpha and Omega #6, due out in March), including some behind-the-scenes looks of his painting process, and even some peeks at alternative cover concepts!
And! And! And! For those of you who are as awed by Wild Sign as we are, you can now pre-order an art print, autographed by Dan himself! Sorry, Patty already has first dibs on buying the original, lol - but I for one plan on getting one of these amazing prints!
Enjoy the beautiful art, and hey - happy Monday, everyone!
--Ann the trusty assistant


We just got the sales figures from the publishers; Smoke Bitten is Number 3 on both the USA Today Best Seller List and on the New York Times Combined Print/E-Book Best Seller List! Wheeee!!!!

Okay, I'll be honest; I was hoping for another number one, because I love this book so much (and also because I told Patty it would be a number one and I hate being wrong ðŸ˜‚) - but right now, in the middle of a global pandemic? I'll take number three and do a happy-happy-joy-joy dance! Thank you so much, all you awesome Patty fans; we love and appreciate you more than you can know! Go, Team Patty!

If (missed the) Mysterious Galaxy's Facebook Live event, Patty will be able to tell you in person how much we appreciate your support. Big hugs to everyone, and stay safe!

Not A New Series Cover Reveal


A lot of you figured it out but this is definitely not happening and is just a fun April Fool's joke from Patty and Ann to give you all a laugh. We hope that it did! 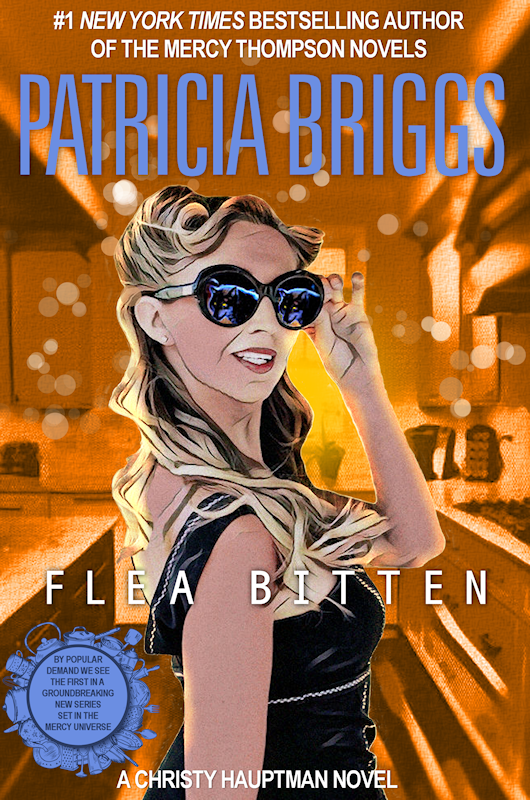 For those of you who wanted another book, wait no more! In a thrilling new addition to the Mercyverse, we can explore old friends, new directions, and the consequences of life, love and terrible choices!


Smoke Bitten will be released in the UK on March 19th.

To celebrate that we want to showcase Patty's UK publisher, Orbit Books, the SF and Fantasy imprint of Little, Brown Book group. Their team works tirelessly to bring the Mercy Thompson books to the shelves in the UK.

Anna has been with Orbit since 2008 and we found a great Q&A interview that she did with David Gullen at the Milford SF Writers Blog where you can learn a bit about what her job was a senior editor.

We also found a great article at the Orbit blog by Laura Panepinto about the Making of a Cover. It's not Patty-centric but it's fascinating reading on the behind the scenes of creating a book cover.

Orbit re-launched their Mercy Thompson covers in 2011. The new covers were put together by Duncan Spilling, Head of Design at Orbit and Nick Castle Design. 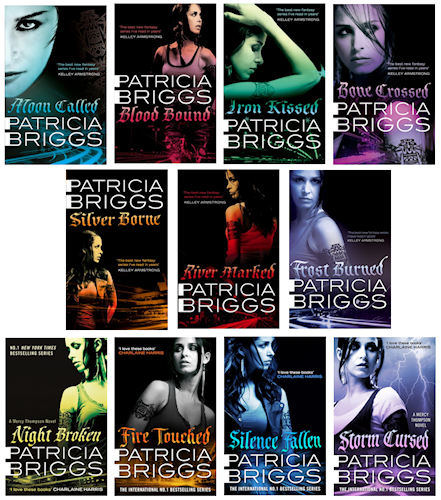 We want to thank the Orbit Team for all their hard work bringing Mercy to Patty's readers in the UK. We're doing a UK Smoke Bitten giveaway and Orbit have kindly offered us a book for one lucky UK reader! Be sure to enter.

Say hello to the Orbit UK Briggs team! From left to right:

Anna Jackson - Publisher of Orbit UK and Patty's editor
Nazia Khatun - Senior Press Officer for Orbit, who works on Patty's publicity campaigns
Joanna Kramer - Managing Editor for Orbit, who handles the production side of Patty's books (i.e. making sure the interior files of the book look lovely and get printed correctly!)
Madeleine Hall - Head of Digital Marketing, who works on Patty's marketing campaigns 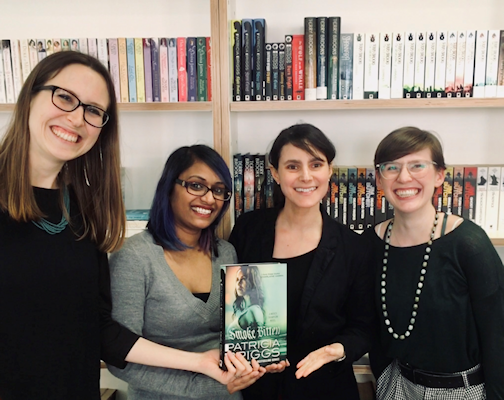 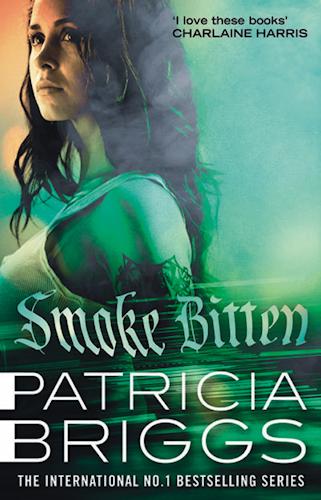 A Message From Patty

We couldn't make this announcement until we were certain that all of the bookstores involved were notified. It is with great reluctance that we have made the decision to cancel the SMOKE BITTEN tour.

A book signing tour means getting on planes every day to travel to a new city, sleep for a few hours (never enough) and get on the next plane to another city--which would make Ann and me perfect carriers to conduct illnesses from one city to another. I never want to be responsible for the death of another human being.

We are doing a number of things for readers over the next few days/weeks instead. Among other things--

On Friday the 13th (and there was a full moon this week, too) Ink Feather Book Reviews will post a podcast of Lauren Zurchin and I talking about books--including SMOKE BITTEN. As soon as that goes live, we will post links to the interview.

On Tuesday (St Patrick's Day, and the official release day for SMOKE BITTEN), here on the Official Patricia Briggs Facebook page, I will answer questions (as many as I can) from 1pm - 5pm Pacific Standard Time. Watch this space for how to participate--I don't expect that it will be complicated.

University Bookstore in Seattle is rescheduling the signing for an event in early June. This will be a ticketed event--you'll need a ticket to get in. Tickets will be available through Brown Paper Tickets; we'll post a link as soon as it's up. The ticket price will be a copy of SMOKE BITTEN, which will be sent to ticket purchasers next week.

We are sending out signed bookplates to the bookstores where I was supposed to be signing. If you want one--talk to the event bookstore.

Signed Books are available through The Signed Page and Barnes and Noble on line, though some might make it to the bricks and mortar stores). You can always mail your books to me with return postage (PO Box address is on my website), and I will sign them and send them back.

At this time, the event with Laurel K Hamilton at Left Bank books is still scheduled to go on. For more information on that: here.

Stay safe, and if we don't meet up at the various conventions/events this year, I'll see you next year.


Do you want to win an early copy of Mercy Thompson#12: Smoke Bitten?

The book will be out on March 17, 2020 but we're running a quick giveaway for one lucky US reader to get themselves an ARC [Advanced Reader Copy]. The ARC is kindly being supplied by Patty's PR at Penguin Random House so due to legal reasons can only be available to Patty's US readers. Don't worry International readers! We'll do something for you after this giveaway is wrapped up. 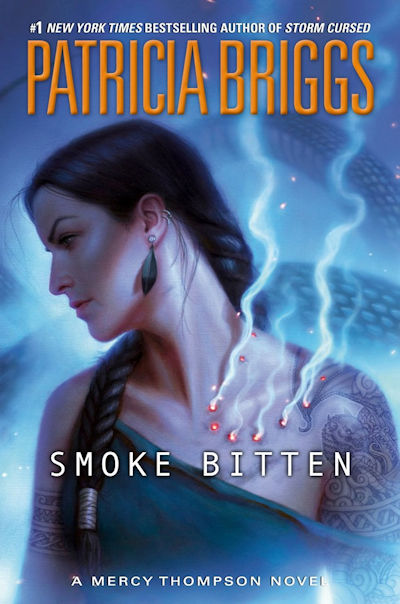 It's that time of year when the signing tour stops have been finalized and Patty and Ann are packing their bags and getting ready for the whirlwind! The Smoke Bitten tour kicks off in Seattle in March and if Patty isn't signing in a location near you be sure to check out her appearances page to see where she and Ann will be travelling to later on in 2020.

In case you've missed it we have a small snippet as well as the whole of Chapter 1 posted on the books page. Go read it now!