How Deep Does the Rabbit-Hole Go? 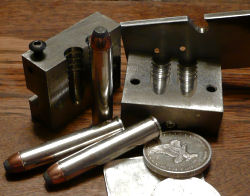 I was pretty sure someone would be making silver bullets, and so I fired up my browser and went looking, assuming I'd just buy a box of them. I did find one company, BulletForge.com that claimed to make silver bullets. Sadly, their site stated that they had no silver bullets for sale, and were no longer accepting orders. Actually, that's just fine, because Patty has already mentioned that Mercy casts her own, and I need to figure out how to do it.

I found that Popular Science had run an article on casting silver bullets. Apparently it wasn't impossible, as long as you have access to high-grade graphite, a well-stocked machine shop (and the expertise to use it) and a silver foundry. My bullet-casting experience is limited to casting a few wrinkled, imperfect musket balls using an iron mold and some lead we melted in a coffee can over the camp fire. It was obvious I was going to need professional assistance of the mold-making variety.

After a bit of searching I found a custom mold maker with a sterling reputation, NEI Handtools Inc. So, I wrote them a nice letter, explaining that I was only partially crazy, and that I'd like to have them build me a graphite mold to cast silver bullets, in case I should ever be attacked by a rampaging werewolf. Patty Melander and Joel Fragoso were very helpful, and told me that they were willing to try to build it, but that I needed to decide exactly what sort of mold I wanted. They were kind enough to put me in contact with Ed Wosika, a self-confessed gun nut and a veritable font of knowledge on all things ballistic. Ed and I exchanged emails . . . and more emails . . . and even more as I tried to rectify my nearly-complete ignorance of what it takes to make a bullet work correctly. Stability, the Greenhill formula, cross-sectional density, twist rates and rifling types were all foreign to me, and essential to making this project work. Thanks to Ed, I have a much better chance of making this work. 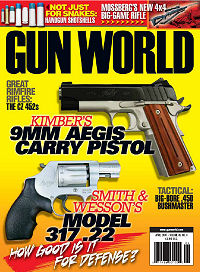 Ed also mentioned an article in in which some ballistics buffs tried to recreate the silver bullets used by the Lone Ranger. He suggested I should get a copy of the article, which would at least allow me to avoid the pitfalls that they'd discovered. I contacted Gun World Magazine, and soon found myself conversing with the associate publisher, Viga Hall. He informed me that the company had changed ownership, and there no computer archives of past issues. He suggested that, since he was personally acquainted with several of the regular authors, if I could figure out who wrote the article in question, he would be willing to contact them and see what could be done. Back to the internet . . . after some searching I found what had to be a reference to the article in question -- and it listed an author, Jack Lewis. I wrote back to Viga, who informed me that he knew "Uncle Jack" well, and that Jack was still a regular contributer.

Jack went out to his storage shed, and found an old copy of the magazine with the article, photocopied it, and sent the copies to Viga, who sent them on to me. The article was titled Lone Ranger Away, with the subtitle It's a Cinch Tonto Didn't Cast These Silver Bullets Over any Campfire. It details, in hilarious and witty dialog, the trials and difficulties some experienced gun experts had in casting silver bullets, and the extremely poor results they obtained when shooting them.

At about this time I was informed that my favorite duo of television superheroes, Adam Savage and Jamie Hyneman, the MythBusters had done a segment on silver bullets. I've been a long-time fan of the series, but I had some complaints with this mini-episode. They cast a slightly-disreputable looking silver bullet, which was identified as being about 190 grains as opposed to 250 for the commercial bullet, and noticably smaller in diameter. They then loaded and tested the penetration of this silver bullet against a commercially-produced lead bullet. Not surprisingly, the lead bullet was the clear winner. I couldn't help thinking, however, that if they had pitted a high-performace silver bullet against an undersized lump of lead that the results might have been reversed.

The phrase "Silver Bullet" is a common idiom for the simple solution; the effortless resolution of a difficult problem. How curious that the namesake of the phrase should turn out to be anything but effortless. They weren't readily available, and by all accounts they weren't easy to make. Even more discouraging, even if silver bullets could be fabricated, the ballistic performance of silver bullets was so abysmal that their lethality was dubious.

Next: Lone Ranger, Go Away